Similarly, you can search for specific genres of television shows using these subject headings:

Choose Library Catalog in the dropdown to search for only physical books and items within the Library. 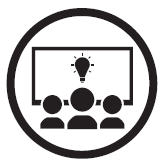 For individual viewing, check out a pair of headphones and use one of the Library's computers equipped with a VCR and/or DVD player.

Most movies and feature films are located in the PN1997 and PN1997.2 section. They are alphabetical by title. If you need help locating a film, please ask at the desk.

To find audiobooks, search for the term "audiobooks" as a keyword or subject in the catalog.

Help us grow the collection